Sunday’s Commonwealth Games season ended with a bang as Australian women set a world record in the 800 freestyle relay.

This was the kind of swim Australia was hoping for in Tokyo last year. In the end, the Australian team finished third behind China and the US, with all three nations bettering the previous world record in the event.

This time, it was all Aussies who kept the pace to sweep the 200 freestyle in the first meet.

Madison Wilson, Kia Melverton, Molly O’Callaghan And Ariane Titmus She touched the wall in 7:39.29 to claim the gold medal and broke the world record of 7:40.33 set by China at the Tokyo Olympics last year by more than a second. The quartet knocked out just two seconds ahead of the Australian and Commonwealth record of 7:41.29 set by Titmus, Emma McKeonwilson and leah blue In the same Olympic final.

Titmus threw an astonishing split of 1:52.82 and went over the wall more than a second ahead of the previous record as Australia became the first country in women’s swimming history to go down a sub-7:40. Titmus’ split was the fastest ever recorded, crushing the previous best of 1:53.45 Federica Pellegrini Swim in 2009.

The Aussies were two seconds ahead of the 7:41.45 that the United States team swam at the World Championships to win gold, and four seconds ahead of the Australian’s own silver-medal winning swim from that race. Three of the four swimmers who swam in that world final returned to the squad, but Wilson, Melverton and O’Callaghan were heavily promoted, in addition to Titmus, the 200 free Olympic champion and the second fastest swimmer ever in the event. All swam faster than in Budapest. 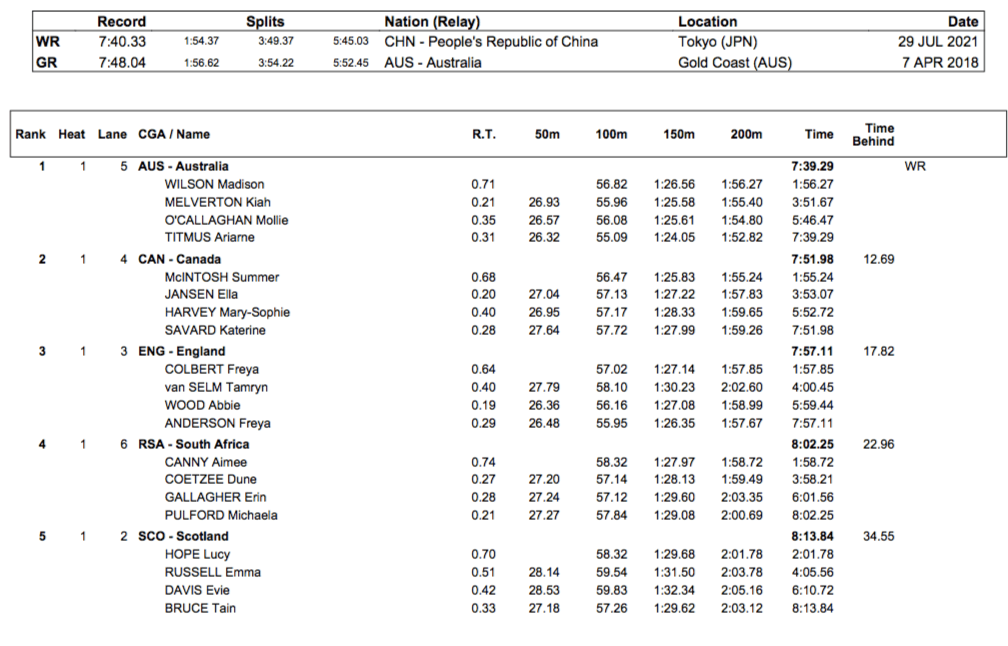